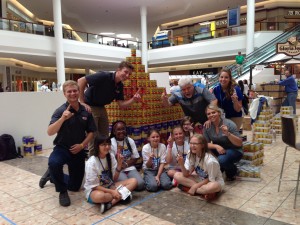 Three of BMWC’s core values are integrity, people and leadership. These values lead us to become partners with United Way to help thousands of people in need. The Lake and Porter County Indiana United Way organizations partnered with U.S. Representative Pete Visclosky to bring a new event to the area called “Canstruction.” BMWC proudly sponsored a team for the event and provided two engineer interns to coach our team of middle school kids with a design made out of canned food items. After the event was complete, the food was donated to the Food Bank of Northwest Indiana for distribution to local food pantries.

The structures had a superhero theme and could be no more than seven feet tall. BMWC’s team was the Cedar Lake Boys and Girls 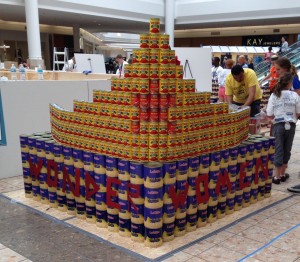 Club. Because all but one member of the team was female, they chose to do a Wonder Woman themed structure. BMWC’s coaches met with the kids for an introduction/design day and helped them create Wonder Woman’s crown into a structure that could be created using only canned food items.

The team met a second time at Purdue University Calumet’s Center for Visualization and Simulation to get a realistic look at the designs they created. BMWC’s team was able to see the Wonder Woman structure they created in a three-dimensional simulation, which was created by Purdue University engineering students on the CIVS computer design system. Seeing the design as a 3-D model allowed our team to determine if they wanted to make any changes to the structure, and help them identify the correct number and type of cans they would need to complete their structure. Each team was given a budget to buy canned goods and supplies that would be needed for creating their design. 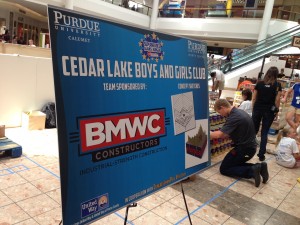 BMWC’s team met one final time on July 25 to build the structure at the Southlake Mall in Merrillville, IN. Six girls from the Cedar Lake Boys and Girls Club worked as a team with BMWC’s coaches to create their Wonder Woman Crown Structure out of canned goods, cardboard and tape in under 4 hours. People were able to view the structures for a week after the design was completed and vote on their favorite.

United Way also created a judging panel consisting of seven local community and business leader from across Lake and Porter Counties to give out three awards in addition to “People’s Choice.” There were nine teams total and about 130 kids that participated in the event.

BMWC’s team won the award for “Structural Ingenuity”! We are proud of our interns for working together with the kids to create such a fun, creative design that was also structurally sound.

The Northwest Indiana Times has many articles that describe each step of the competition. For more information, visit the link below.