BMWC sponsored the Cedar Lake Boys & Girls Club team at the United Way Canstruction NWI event, which is a regional event that challenges middle school students to fight hunger by competing to build large structures entirely out of canned food.

Students used the S.T.E.M. (Science, Technology, Engineering and Mathematics) academic disciplines to design and build the structures, working in conjunction with Purdue Calumet’s Center for Innovation through Visualization and Simulation (CIVS) students.

All of the canned food items are donated to the Food Bank of Northwest Indiana to feed the hungry. Our structure consisted of more than 500 tuna cans, 200 cans of corn, 150 cans of olives and 35 cans of tomatoes. Our team was given a budget to buy the cans with and needed to provide well-rounded nutritional items with the cans they chose.

The theme this year was Superheroes, and our team chose to make the Green Lantern symbol with an H in the center to represent “Hunger.”

The teams had 6 hours to build their structures at the Southlake Mall in Merrillville, IN. The structures were on display for a week following the build, for the public to view and vote.

The winners were based on votes, engineering of the structure, nutritional value of the canned items used and creativity. BMWC’s team won the Structural Ingenuity Award. 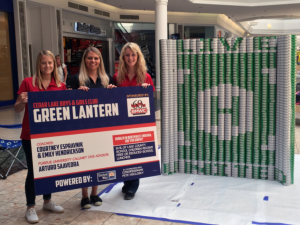 This is the second year BMWC sponsored this event. Last year, we also worked with the Cedar Lake Boys & Girls Club, and we won the “Structural Ingenuity Award” for our design.

“It’s great to work for a company like BMWC that finds creative ways to work and connect with young people,” Marketing Intern Emily Hendrickson said.

BMWC has partnered with United Way for many years, look for more charitable events in future issues. Our United Way campaign will kick-off in November.