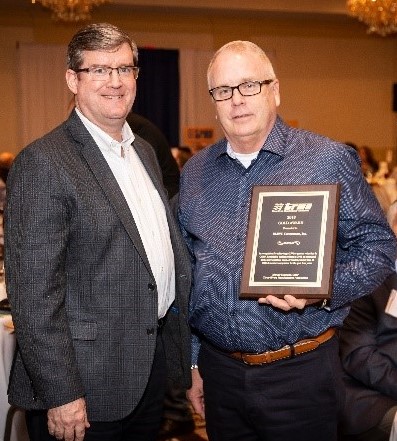 Three Rivers Manufacturers Association (TRMA) recognized BMWC with Gold and Meritorious awards at their annual dinner on March 19.  This event is hosted by TRMA to recognize contractor companies for their pursuit of high-level safety performance. In fact, the TRMA OSHA incident rate is the lowest in the country. We are honored to be working alongside such remarkable companies in this industry.

These two awards were granted for BMWC’s commitment to safety and excellence, which was reflected in the efforts at each of the sites we are involved. BMWC was also highlighted as having a successful approach to work crew discussions, a focus on relative Near Loss Reporting and a strong LPS Milestone score. BMWC was granted the meritorious honor for adhering to an OSHA Total Recordable Rate (TRIR) of .6 or less while operating at a TRMA facility and an overall TRIR of 2.0 or less.

Commenting on the award recipients, TRMA Chairperson Monica Mainland says, “Equally impressive is that many awardees worked all of 2018 without a single safety incident, achieving the ideal—Zero Incidents. TRMA Manufacturing members prioritize safety; and their resulting safety culture is evident in their employees and their contracted workforce safety results.”

Thank you and congratulations to all the team members who had a hand in this outstanding accomplishment!